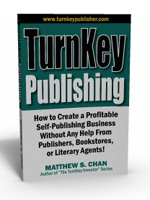 Today, I discovered a self-publishing blogger and author, Michael Marcus, that absolutely HATES my book “TurnKey Publishing”. The title of his review of my book is:

“This book is inaccurate, inadequate, cynical, misleading and overpriced. It’s ugly, too. But it’s not the designer’s fault.”

He even uses the word “ghastly” to describe the interior of my book.

Now, you may be asking, why the heck would I bother to even highlight this “negative” book review?  Simple. Michael took a respectable amount of time to cover my book in such detail without resorting to personal attacks about me (mostly). It also gives me the rare opportunity to have an open dialog about my views of publishing and why I do what I do.

This “negative” review is a real-life case study of why I became an independent publisher and picked and chose the publishing rules I follow. I don’t fit into traditional publishing and probably no one would ever publish my work if I had to follow the traditional rules.

In fact, I have almost NO personal ties to anyone in either industry. And yet despite the fact I am NOT a “best-selling author” and downright unknown, since 2004, I have on a very part-time basis collectively sold many thousands of copies of some 20+ titles (many of which I authored) generating very spendable income and opening business opportunities with nearly zero marketing effort. Why and how did that happen?

Is it because I followed all the established rules? Nope, not even close.  And Michael Marcus very clearly hates the book I wrote in 2008 and published in 2009. If Michael hates that version of my book, he would probably vomit on my ideas updated for 2011 or 2012.

In my upcoming posts, I am going to use his blog post as a platform to expand my dialog on the subject. As I tell people, you don’t have to agree with me.  Take the advice that works for you and leave the rest behind.